Osama's dead, but are we any safer? 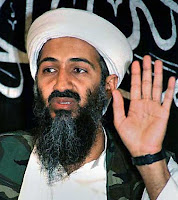 I'm sure everyone in the world heard the news tonight, or at least all those that care and have access to the news.  Osama bin Ladin is dead.

I watched a bit of the news tonight, including President Barack Obama's speech.  I guess Osama was shot about a week ago and the United States has his body in their possession.  It was a good speech, but Obama is a very gifted speaker, whatever his other strengths and faults may be.  Not as funny as Bush was, but, then, that wasn't intentional.

So, Osama is dead.  Not that it means much, really, except if Al Qaeda has any leadership left they now have a martyr to rally people.

I've been talking to people tonight (or this morning as the case may be), and was asked the question, are they going to show the body.  My response was that I hope not.  I still remember the video of Hussein's hanging being released on the Internet and being so popular as entertainment, laughing at it, thinking it was funny.  It sickened me, and still bothers me.  No matter how bad he was and what he did, it's never okay to laugh at someone else's death.  And it was definitely not a humane hanging.  No, I hope they don't show Osama's body.

And is it proof to see the body?  It's pretty easy to make another body look like the one you want.  Hollywood does it all the time.  I never believe anything blindly.  But I also know evidence can be faked, so evidence isn't proof anymore than just words.  The only thing that is 100% is my own experience.  And even that is subjective and filtered through the illusions my mind creates to protect itself from what it can't understand.

The big question I'd like to know is why does it matter if they really killed him or not.  Are we any safer because he's dead?  I'm not talking do we feel safer, I'm talking are we safer in reality?  Am I, sitting here in Wyoming, less likely to die now?  Or even, to be fair, less likely to die from a terrorist attack?

Al Qaeda is only one, small orginization.  The IRA could do more damage in the US than Al Qaeda, if they had any reason to.  Not that they'd ever have a reason.  There's been no major Al Qaeda organized attacks outside the Middle East since the Underground bombing in London in 2005.  Were they still a threat to the United States even a few weeks ago, before Osama was killed?  I don't think so.

What's safety, anyway?  People bragged about how there had never been an attack on US soil since the War of 1812 besides Pearl Harbor (if you don't count the Civil War, of course).  We as Americans thought we were safe.  When 9/11 happened, people went from complete safety, to fear for their lives.  They were safe before but not safe afterwards.

What changed?  Perception, not reality.  It's not safety we're looking for, it's to feel safe.  Terrorism doesn't make the general public less safe, it makes them fear, it makes them feel less safe.  Everything is perception.  Just like the Almighty Dollar.  The dollar has value because people still believe it has value, even though it isn't backed by anything.  Politics and economics are about faith, just like religion.

So, are we safer with Osama dead?  No.  Do we feel safer?  Yes.  Do we care about the difference?  Now that is the real question.

~Bethany
Posted by Bethany Davis at 3:32 AM